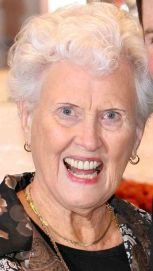 Born on February 9, 1927 in Cleveland, Tennessee, she went on to attend Nursing School at University of Tennessee (Memphis) where she met and married one of her professors, Dr. Joseph Hugh Trapold (predeceased May 19, 2001).   They were happily married for more than 51 years and resided in Convent Station, NJ for more than 40 of those years.

She also leaves behind her dearly cherished 13 grandchildren and 7 great-grandchildren, a dear sister and brother-in-law, and several nieces and nephews.  She is predeceased by her beloved parents, sister, two brothers, and her husband’s family.

She converted to Catholicism in 1949, and became a devote and practicing Catholic for the remainder of her life.   Prior to becoming a parishioner in 2003 at St. Mary’s Catholic Church in Denville, NJ, she was an active member of St Thomas Moore parish in Convent Station, NJ for nearly 35 years.

True to her birth state’s motto – “The Volunteer State”, she was an untiring volunteer at Morristown Memorial Hospital for more than 30 years; Girl Scout troop leader; member of Morristown’s Women’s Club and member of Delbarton’s Mother’s Guild; and Welcoming Committee for new residents at Franciscan Oak’s in Denville, NJ.

She loved to travel and had numerous exciting and exotic trips around the world.

Her friendly and outgoing personality made her the life of the party.

She made it a point to remember people’s names and always said hello to everyone at Franciscan Oak’s in Denville, NJ., where she was well known and liked for the past 16 years.

A family memorial Mass will be held for Carolyn at 10 am on August 19th. Due to Covid-19 restrictions, the Mass will be livestreamed from Assumption Church, Morristown, NJ for all friends who would like to participate. Please go to the homepage of the parish website, www.assumptionparish.org and scroll down to the "box" that says "ec live".

In lieu of flowers can be made in her memory to Catholic Relief Services by way of www.inmemof.org.

Share Your Memory of
Carolyn
Upload Your Memory View All Memories
Be the first to upload a memory!