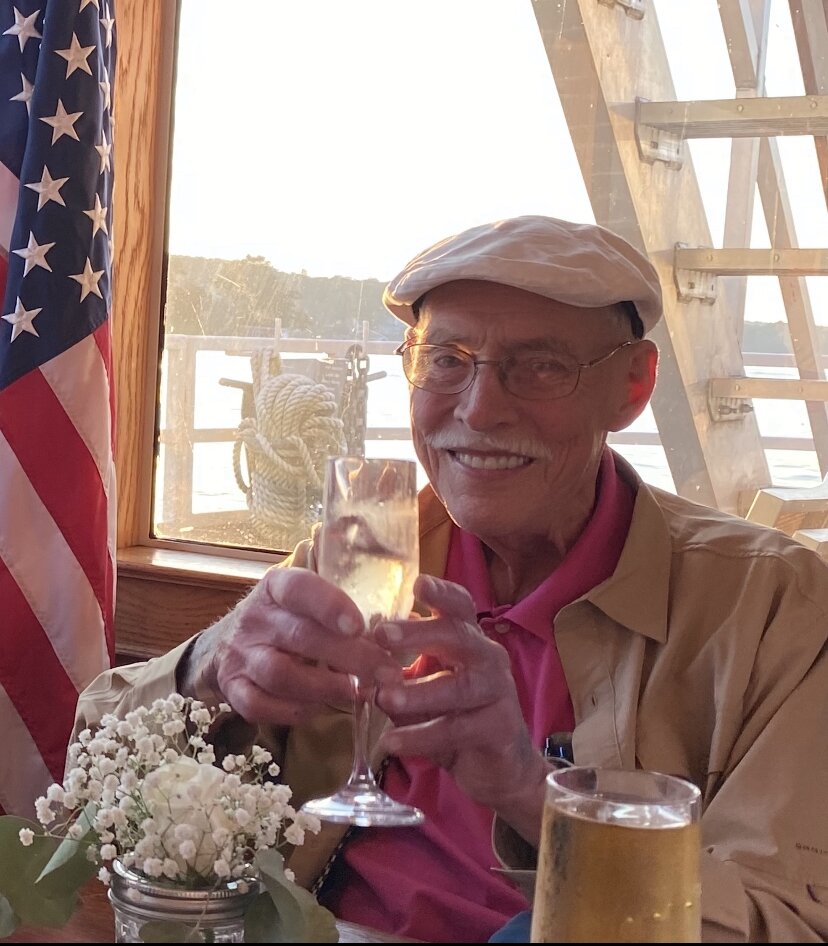 You can watch Abe's Funeral Service by clicking here.  Thank you for your continued love and support.

A man full love and creativity who celebrated life.  A Funeral service will be held on Saturday, September 18th at 11 am at Holy Trinity Church, Rockaway Twp. Interment to follow at the First Presbyterian Church Cemetery, Rockaway.  Friends and relatives may visit on Friday, September 17th from 4-7 pm at the Norman Dean Funeral Home, Denville.  Please wear a mask.

Born on January 30, 1939 to Reverend A. Ellsworth Grove Jr. and Velma Elizabeth Steinmetz, Abram Grove was one of two siblings who grew up in their home in Sellersville, PA.  His father was a Lutheran Minister and mother was a school teacher.

As a young boy he worked on many of the surrounding farms milking cows, collecting eggs, feeding the animals, getting hay, bringing the horses to the fields and picking crops forming his strong work ethic and love of nature. As a teenager, Abe immersed himself in music joining marching band playing the tuba and was also a director of the high school band.  Singing in various chorus groups, his favorite was the barbershop quartet.  In 1963, he was selected to attend the Philadelphia Musical Academy.  Abe taught and performed regularly with his own band group called the “Yanks of Dixie.” and was also the director of a 15-piece orchestra.  By sophomore year, he was completely self-sufficient playing throughout the northeastern US and paid for his own college education.

Abe auditioned for and was selected to be part of the prestigious President’s Own US Marine Band headquartered in D.C. and would have been serving his country with his musical talents, however, the continuous traveling conflicted with his desire to settle down.  He instead accepted a music teaching position enjoying many years directing the middle school band in West Milford, NJ and was known for creating highly entertaining themed concerts.  While teaching he continued his education and subsequently obtained a Master’s of Arts in Education from William Patterson college.  He later expanded that to Masters+ 60.  After over 32 years of teaching, Abe retired and continued his passion for the arts by working and studying with many recognized and respected glass artists and became quite adept at imparting specific qualities to glass with the use of heat. Application of those techniques led to the formation of “Abe’s Plates” in 1988.

With over 40 years of experimentation, study, and practice, Abe has achieved the respect of, and been awarded great honors by, the glass art community for contributions to the art of casting and fusing glass. Abe was fortunate to have a long career in the arts and proud his work is part of many collections around the world including the Corning Glass Museum.  He also designed and executed about 100 architectural etched glass and/or stained glass windows.  His love of glass began as a small child.  With his father being a preacher, Abie’s seemly endless hours in church led him to paper airplane making and watching the play of light throughout the stained glass windows that can still be seen today at the St John’s Evangelical Lutheran Church Ridge Valley in Sellersville, PA.

Abe married Carole on June 23, 1978 becoming the father of 3 beautiful daughters, Carleen Anne Mulqueen, Brenda Gail Mulqueen and Jennifer Sue Aponte (Mulqueen).A  Settling down in Rockaway, Abe along with his wife Carole, designed and built their dream home together with beautiful gardens, deck and fish pond as well as lots of custom carpentry and stained glass made by Abe.  Their home became the loving gathering place for all holidays with their daughters and 5 grandchildren, Laura Evelyn Flynn, Kenneth George Flynn III, James Scott Flynn, Michael Abram Aponte and Lily Christine Alexandra Mulqueen.  Abe was a wonderful Grandpa who loved to play and tease with his grandchildren.  He enjoyed many outings with them to museums, zoos and parks. They brought him so much joy and he was very proud of them.  Abe enjoyed sharing his hobby of fishing, appreciation of music, art and love of nature and animals with his children and grandchildren.

Abe volunteered at a food kitchen through the Shepherd of the Hills Lutheran Church and later became a member of Holy Trinity Lutheran Church.  He was an active member of the White Meadow Lake Friendship Senior Citizens Club enjoying many activities and outings. With these friends, he was renowned for his spirited affection, wit, jokes and fun Halloween parties.  He will be sorely missed but expressed his tremendous faith in God and had no fear of death.  He has asked all who knew him not to mourn but to raise a glass of champagne to celebrate his life.

Share Your Memory of
Abram
Upload Your Memory View All Memories
Be the first to upload a memory!